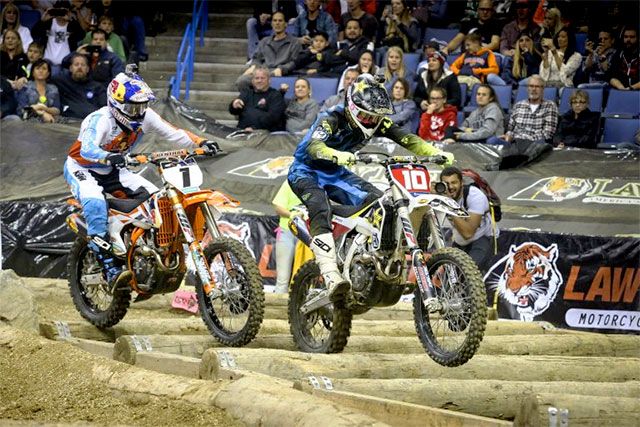 The 2017 AMA EnduroCross Series dates have all been confirmed with a seven round series set to kick off on August 19th inside the Orleans Arena.

After the recent acquisition by Bonnier Motorcycle Group, the first order of business was getting the agreements finalised with each of the arenas. Those agreement are now in place and plans are ramping up for some additional exciting enhancements to the race format.

The opening round will be back at the venue where the first AMA EnduroCross event took place in 2004, the Orleans Arena. For the first time since that first race, Las Vegas was not part of the 2016 championship due to schedule conflicts so the series regulars are looking forward to being back in Vegas.

Round two will see a first time visit to Reno, Nevada. The large floor of the Reno-Sparks Livestock Events Center will allow for an awesome track and there are plenty of materials to create challenging obstacles.

Denver, Colorado will host round three of the series. This venue has hosted the second most EnduroCross events over the years as it was added to the schedule in 2007, the first year of a multi-round series for AMA EnduroCross.

Round four will visit the XFINITY Arena in Everett, Washington. This venue has always proven to be extremely popular with a packed house and is known for slippery logs and wet dirt.

For round five, the EnduroCross series will visit Scottsdale, Arizona for the second year. The arena was packed for the first ever event last year with fans cheering on many of the series regulars that call Arizona home.

The Ford Idaho Center will host the penultimate round of the series and this venue is known for some of the largest logs and rock sections that challenge even the best riders. This has made for spectacular action and unpredictable racing over the years.

Finally, the 2017 series will conclude inside the Citizens Business Bank Arena, in Ontario, California. Ontario has hosted the final round for the last three seasons now and attracts a lot of the motorcycle industry professionals looking to see the champions crowned.

Look for more news on some enhancements to the race format in the coming weeks.