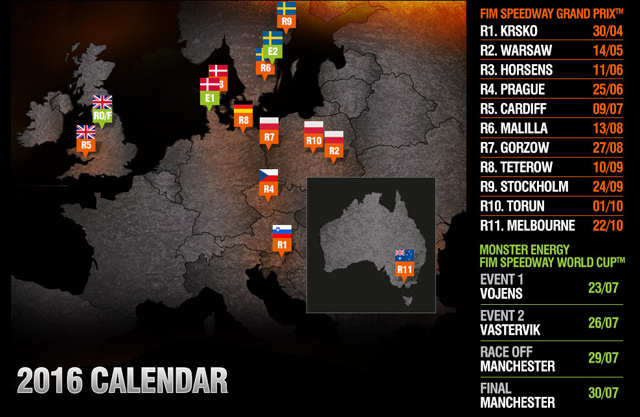 The individual FIM Speedway World Championship race will be contested over 11 rounds, and launches with the Slovenian SGP in Krsko on April 30, where Matej Zagar bids for a famous home win.

This is followed by the ultimate speedway weekend as the LOTTO Warsaw SGP of Poland returns to the iconic PGE Narodowy on May 14, with the added bonus of the PZM‰Ûªs Poland versus the Rest of the World Meeting on Sunday, May 15.

The action moves to Denmark on June 11 as the CASA Arena Horsens hosts the KjÌ_rgaard Danish SGP ‰ÛÒ won this season in sensational style by home hero Peter Kildemand, who has a permanent wild card for next year‰Ûªs series.

The sport‰Ûªs top names then head to Cardiff for the blockbuster Adrian Flux British SGP at the Millennium Stadium on July 9, where double world champ Tai Woffinden and Chris Harris will be guaranteed some huge home support at world speedway‰Ûªs flagship event.

Belle Vue‰Ûªs new National Speedway Stadium in Manchester provides the stage for the Race Off on Friday, July 29, with the Final 24 hours later on July 30. Great Britain are seeded into the last four as host nation as they target their first SWC medal since 2006.

The Stockholm SGP returns to the fantastic Friends Arena on September 24, before the final European round of 2016 ‰ÛÒ the Torun SGP of Poland on October 1.

The action concludes Down Under at Melbourne‰Ûªs Etihad Stadium with the Australian SGP ‰ÛÒ an event that attracted in excess of 26,000 fans as it made a sensational return to the calendar last month following a 13-year absence.

Tickets are already on sale for some events. Click here for more details and to view the calendar: https://www.speedwaygp.com/calendar-events.