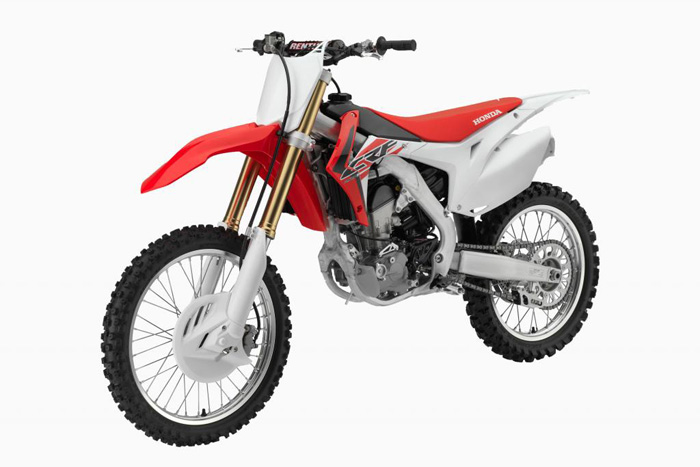 The 250cc model has been updated with a sizable power boost and suspension upgrades, while the Honda CRF450R is raising the bar once again with upgrades to the front and rear suspension and changes in steering geometry.

The CRF250R has long been the weapon of choice for MX riders thanks to its fluid power delivery and sharp chassis design, that balances lightning-fast agility with sure-footed stability.

But in recognising the fast-paced development of the MX world and knowing all too well how potent the smallest improvements can be on the track, Honda has now taken the 2016 model - due to hit Australian shores in October 2015 - to the next level with an array of exciting upgrades.

The main focus of the 2016 enhancement revolves around a completely revised cylinder head, piston and con-rod. The new engine is more powerful in the high rev range and stronger off the bottom, while still maintaining its smooth feel and delivery.

An extensive redesign of the power plant has resulted in the perfect outcome; less weight and more power. Maintaining its legendary mid-range punch, the 2016 Honda CRF250R makes no sacrifices.

While both fork legs employ the same stroke and internal dimensions as employed previously, they have undergone extensive development to reduce friction through a shorter stroke, improving suspension reaction speed and also increasing reaction force at midstroke, boosting control during prejumping and landing.

The lightweight suspension - specially developed by Showa for the CRF250R - is designed to fully unlock the chassis' performance potential for the ultimate riding experience.

Other changes like the resonator chamber in the exhaust and a redesign of the footpegs make the CRF more practical than ever before, while cutting edge technology like the Engine Mode Select Button (EMSB) is an exciting reminder that the new model means serious business.

Like its little brother, the CRF450R is also raising the bar.

Since its introduction in 2002, the Honda CRF450R has combined very usable power with total control, redefining the word "balance" from a rider's perspective. The CRF is renowned for giving both professional/amateur racers and hobby enthusiasts equal opportunity to extract maximum performance from both themselves and their machine.

On top of making a name for itself as a hard-hitting package at all levels, the Honda's reliability, longevity and build quality have set the benchmark on a global scale.

Every single model since its beginning has delivered cutting-edge updates from Honda's busy competition program around the world and the 2016 evolution - due for release in August - is no exception.

Both compression and rebound damping rates are firmer to maintain control towards the point of bottoming out. The rear shock also has more rebound damping in the middle-upper range of its stroke, plus works a new ProLink ratio. The new CRF offers a wider range of adjustment on both the front and rear.

Matching the ability of a small bike with the power of a big bike, Honda has stuck with the hugely popular 2015-spec 449cc four-stroke engine for the new model CRF. Last year's extensive remodel of the powerplant resulted in increased power and torque off the bottom line, with a smoother delivery through the middle and increased peak output and rpm at the top end.

Designed to make their already very usable engines even more adaptable, both the CRF250R and 450R have been fitted with the Engine Mode Select Button (EMSB). The EMSB allows the rider to choose between three engine maps designed for different riding conditions and styles.