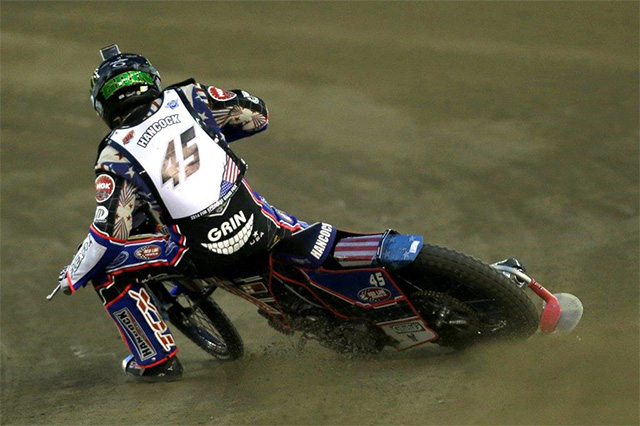 American legend Greg Hancock will become the first FIM Speedway Grand Prix world champion not to don the No.1 race jacket in 2015 after next year‰Ûªs riding numbers and substitutes were revealed.

The newly-crowned triple world champion has elected to stick with his iconic No.45 riding number, despite earning the right to wear No.1 after sealing the sports biggest prize in Torun, Poland last Saturday.

Outgoing world champion Tai Woffinden of Great Britain wore the No.1 race jacket this season, but dons his own No.108 after finishing fourth in the standings.

Riders have the option to use their SGP ranking number, which is dictated by their finishing position in the previous year‰Ûªs World Championship or their ranking from the GP Challenge.

They can also nominate their own, provided they choose an available number higher than 22.

World No.2 Krzysztof Kasprzak sticks with No.507, while Nicki Pedersen has opted to take on the No.3 race jacket after finishing third in the World Championship ‰ÛÒ making him the only rider to use their 2014 finishing position as their riding number next term.

Fifth-placed Matej Zagar ‰ÛÒ one of the first men to promote a rider number ‰ÛÒ keeps No.55, while Andreas Jonsson retains No.100. Aussie champ Chris Holder sticks with No.23 and Jaroslaw Hampel wears No.33 again.

Australia‰Ûªs GP Challenge runner-up Jason Doyle, the only rider in the field never to have contested an SGP round, takes on No.69, while Poland‰Ûªs Maciej Janowski has picked No.71.

Denmark‰Ûªs Michael Jepsen Jensen will ride wearing No.52 and Swedish champion Tomas H Jonasson completes the line-up at No.30. All four riders make their full-time SGP debuts in 2015.

They will be drafted into an SGP meeting if one of the regular 15 riders is forced out through injury, illness or other reasons.