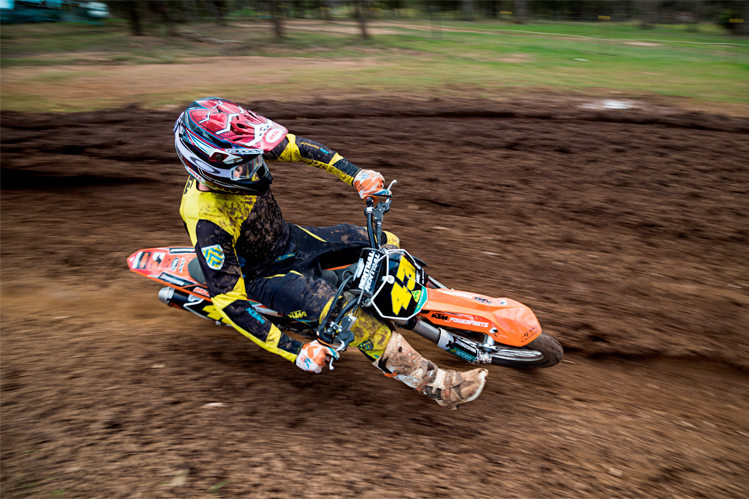 The 2014 KTM AJMX Championships have been run and won with KTM pilot Mitch Evans claiming two of the eight titles on offer to Australia's juniors today.

Evans produced some outstanding riding to win every 250cc 15yrs race and all but one 125cc 15yrs moto where he placed second.

"It feels great to go undefeated in the 250 but I was a bit disappointed to drop a race in the 125 class." Evans said after taking out the premier event of the week. "I'm pretty pumped to get two titles."

Second in the 25o 15yrs class overall was Jordan Hill and Ryan Eden took up third, behind Evans in the 125 was again Jordan Hill while Dylan Dukes rounded out the top three.

"It feels amazing, it's the first championship I've won on a bigger bike." Dyce said. "The start of my week was shocking, nothing was going right for me but I was still able to pull away with a win."

Wade Kirkland and Cody McMahon rounded out the top three in the class respectively.

Hunter Lawrence joins his younger brother Jett as 2014 Australian Champion after racing away to an impressive final moto win to clinch the 250cc 13-U15 class.

WA rider Caleb Grothues recovered from a spectacular crash on Thursday to claim the top honours in the 85cc 12-U14's, he stunned many by even being on top of the bike for the final day of racing.

"I was hurting a bit out there on that last race." Grothues said. "Just tried to ride smart and bring it home, I couldn't of done it without everyone that's helped me."

The 85cc 14-U16 class saw Cooper Pozniak take the top gong after holding off a fast approaching Hugh McKay and Cody McMahon over five frantic finals.

"I'm speechless, it feels so good to win my first national title." Pozniak said. "I've been training so hard lately and it means so much to me to win this."

Danielle Foot claimed the 85cc 12-U16 Girls class and was runner up to Ashleigh McCormick in the 250cc 12-U16 girls Championship.

The 2015 Australian Junior Motocross Championships is set to be held in Western Australia, with Motorcycling Australia due to release more details in the near future.

Top Image: Mitch Evans scored himself a double at the KTM AJMX.