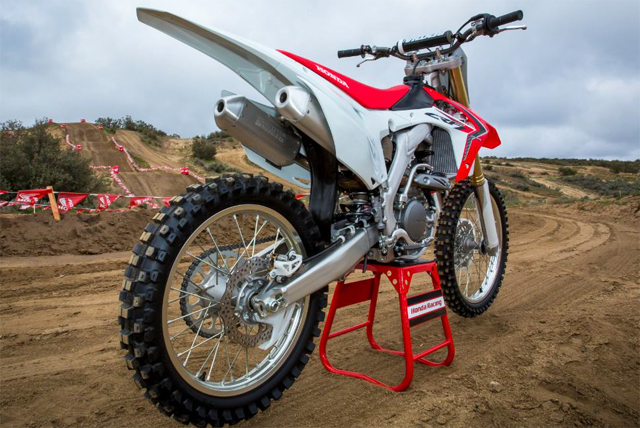 Class-leading handling, improved power and trimmed weight define Honda‰ЫЄs 2014 CRF250R which will make its way to Australia in September 2013.

In what is effectively a complete overhaul of an already championship winning machine, Honda‰ЫЄs CRF250R boasts a new aluminium frame, an updated fork, new swingarm, new shock and linkage ratio. Combine these changes with Honda‰ЫЄs patented dual-muffler exhaust and engine advancements, and the CRF250R will be an unbeatable motocross machine in 2014.

At the heart of the 2014 CRF250R‰ЫЄs transformation is the aluminium beam frame that debuted on the CRF450R in 2013. The low centre of gravity and reduced turning inertia of the new chassis helps improve the already stunning handling abilities of the CRF250R over the ground and also in the air.

Internal improvements to the 48mm Showa inverted front fork are complemented by a compact new Showa rear shock, revised Pro-Link suspension and a redesigned aluminium swingarm. While the true dual-function design of the front forks offers full compression and rebound-damping functions in each leg for balanced, proven performance, the new swingarm, linkage and Showa rear shock helps the CRF250R hook up better under all types of track conditions.

Already renowned for delivering incredible drive from anywhere in its wide rev-range, the CRF250R‰ЫЄs 249cc engine has received a multitude of upgrades from HRC‰ЫЄs development engineers for 2014. These include major work on the PGM-FI fuel injection, gas flow through the head as well as intake and exhaust efficiency.

A new cylinder head, higher-compression piston, head porting and new dual-stage injector timing for the CRF250R‰ЫЄs fuel injection are fine-tuned to work with the new dual exhaust to give more low-end horsepower and top-end revs.

The new CRF250R adopts the exclusive twin-muffler setup similar to that of the CRF450R. The mufflers are shorter and lower tucking in closer to the machine‰ЫЄs centre which helps to make the CRF250R a better handling machine and also contributes to the motorcycle‰ЫЄs improved power.

Finished off with updated bodywork, better feel and control are guaranteed thanks to new rigid attachment points where the rider contacts the bike. In addition, the rear fender has a lift point with integrated support to make it easier to hoist the bike onto a stand.

Be prepared for some serious competitive motocross riding when Honda‰ЫЄs CRF250R touches down in September 2013.

See your Honda Dealer and order your winning package today. More information regarding price will follow, head to www.hondamotorcycles.com.au or call the Dealer Locator on Ph: 1 300 1 HONDA for more information.