2013 ASBK Championship a Special one for Wayne Maxwell 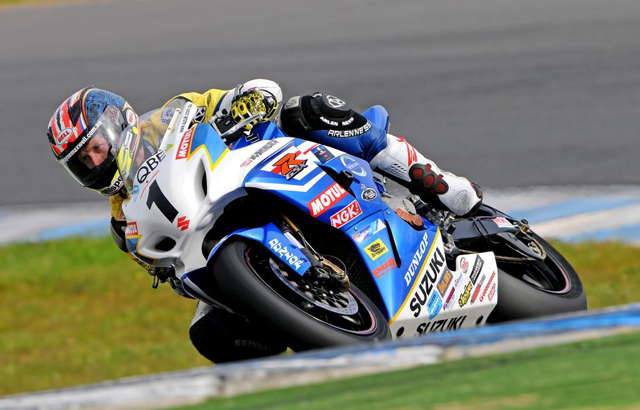 Team Suzuki's Wayne Maxwell wrapped up the 2013 Australian Superbike Championship at Phillip Island in Victoria on Sunday, 6 October, making it back-to-back ASBK titles for Suzuki and the GSX-R1000.

Maxwell claimed Superpole on Saturday with a new national best lap time of 1m32.274 of the scenic 4.445-kilometre circuit, before clinching the title in Sunday's opening 12-lap affair with a 0.014s victory.

Later on in the afternoon Maxwell, competing with the brand new number one plate, claimed a fighting third position in mixed conditions to seal the runner-up overall for the round.

"I didn't start the season strong, but certainly gained momentum mid-season and it's a credit to all of Team Suzuki," Maxwell reflected. I"t was awesome to do the fastest-ever Australian Superbike lap around here in qualifying and then to clinch the championship with victory in race one was a dream result.

"It's been a special first year with Suzuki and I've fit in really, really well. I have to say a massive thanks to the whole team; Phil, Lynne, Warren, Hayden and Graham, plus Robbie, who has been a great teammate. Also thank you to all of our associated sponsors - the championship has been a real team effort," Maxwell added.

Team Volvo Group Suzuki's Robbie Bugden was also in top form at Phillip Island, qualifying third and rounding out the top three in a thrilling first race. Second in race two cemented the five-time New Zealand Superbike Champion third overall for the round and championship.

"It was a bit of a tough round, but we had a cracker race in that first race," Bugden said. "That second race was a bit of a gamble, it was in terrible conditions.

"Overall in 2013 it's been a great year. For Team Suzuki, we have been the only two riders who have been on the podium at every round, so it's a credit to the team at Suzuki," he added.

"I was a bit disappointed we couldn't get a 1-2 for the team, but we're happy enough. I just want to say a big thank you to Hayden who is in my corner and the whole Team Suzuki."

Both Maxwell and Bugden featured on the podium at all seven rounds during the 2013 ASBK season, resulting in one of team manager Phil Tainton's most successful years on record at Team Suzuki.

"It's one of our best seasons ever, if not the best," Tainton said. "We had the guys on the podium at every round, they shared wins and worked really well together throughout the season as great teammates.

"Wayne adapted to the GSX-R1000 and rode it exceptionally well, while Robbie rode the best I've seen him ride in his whole career. The team around me has made the operation run like clockwork and as Wayne said, it's a real team effort."

Team Suzuki will now turn its attention to the 2013 Australian Motorcycle Grand Prix support races to be held at Phillip Island in Victoria on 18-20 October.